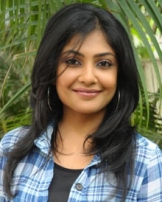 Kamalinee Mukherjee also known as Kamalini Mukherjee, is an Indian film actress. She has appeared in Telugu films as well as in Tamil and Hindi language movies.

After graduating with a degree in English literature, she completed a workshop on theatre in Mumbai because of her strong background in it. She made her acting debut in Phir Milenge (2004), a film that was based on the subject of AIDS. Though it went unnoticed, she gained recognition in the multiple-award winner, Anand (2004).

Mukherjee was born and brought up in Calcutta, India. While her father is a businessman, her mother is a garment designer. She is the eldest of the three siblings in the family. Owing to her "love for being on the stage" since childhood, she acted in all sorts of amateur and professional stageplays while in school and college.

Incidentally, she always portrayed masculine characters in these plays. Besides theater, she developed a love for reading spiritual works, painting and writing poetry. Just before she began her acting career in 2004, she had written three poems, each of these titled as Thoughts, Confusion and Solitude for poetry.com, a poetry-based website.

One of these poems was selected for an International Poetry Contest, where along with one of the 150 people all over the world, she was invited to Washington D.C. for a seminar that was presided over by Dalai Lama. Besides writing poetry, she also underwent several years of training in Bharatanatyam, an Indian classical dance form.

After graduating with a degree in English literature from Loreto College in Kolkata, she took up a hotel management course in New Delhi, but left it midway. Thereafter, she took a course in theatre arts in Mumbai due to her good background in the field. She performed in many theater plays and also modeled in advertisements for brands such as Neelkamal Furniture, Parachute, Fair & Lovely and Ayush.

After noticing Mukherjee in an advertisement, actor-director Revathi offered her a role in her second directorial venture, Phir Milenge, that revolved around the subject of AIDS. Though initially apprehensive about her entering into the acting profession, her parents were very supportive.

In the film, she plays a radio jockey and the younger sibling to Shilpa Shetty. Despite the fact that hers was not a lead character, she had ample role to play in the film. Although the film met with critical acclaim, her role went relatively unnoticed.

Around the time Phir Milenge happened to Mukherjee in Bollywood, Sekhar Kammula, a relatively new director from the Telugu film industry was in the process of casting for his next Telugu film, Anand. After coming to know about her, Kammula selected her after a screen test. She said that the role of an independent and modern woman, which was just like her own personality, appealed to her.

When asked about her thoughts on a total change of working environment from Bollywood to Tollywood, she said that the only difference was with the language and that she was more comfortable working for Anand because the entire crew belonged to same age group. With her being a Bengali and not knowing Telugu, well-known singer and television host, Sunitha lent her voice for the film.

After completion of filming, she felt that as a relative newcomer, she couldn't have asked for more, but thought that she could have performed better. Despite her thoughts, the film won 6 prestigious 2004 Nandi Awards bestowed by the Government of Andhra Pradesh. Among these, Mukherjee won the Nandi Award for the Best Leading Actress. Upon receiving the award, she said "it is beyond belief". Besides this, she won a couple of awards for being the best debutant actress of the year.

After receiving appreciation for her portrayal of a strong-willed, independent and modern woman in Anand, her next film was Meenakshi in 2005. Despite the film not finding much commercial success, Mukherjee once said that she did not regret doing the film and that it was a big learning curve.

The film reviews, however, praised Mukherjee for her acting skills. In 2006, she appeared in two Telugu language films - Style and Godavari and a Tamil language film, Vettaiyaadu Vilaiyaadu.

Style was a dance-based film that comprised of actor-choreographers, Prabhu Deva and Raghava Lawrence, Charmee Kaur and Raja, besides Mukherjee. Due to the presence of an ensemble cast, there was not much for her to prove.

Godavari, which was Sekhar Kammula's next film, starred Sumanth and Mukherjee in the lead roles. This drama film, which had the Godavari River in the backdrop, dealt with a romantic love story between the lead characters. Mukherjee portrayed the role of a woman with independent thinking and tremendous inner strength, under the "backdrop of middle/upper middle class sensibilities, new aspirations, identity crisis, independence, yearnings and moreover, parental concerns."

The film received predominantly positive reviews, and Mukherjee's role was particularly praised. While one review said that she was "beautiful ... both in looks and in her measured acting style," another review praised her for the "intense yet cool portrayal."