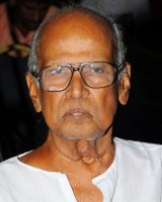 Bapu is an Indian film director, known for his works in Telugu cinema. He is a music artist, painter, illustrator, cartoonist, and designer. In 2013, he was awarded the Padma Shri, for his contribution to Indian art and cinema. He breathed his last on August 31, 2014.

Bapu was born on December 15, 1933, in Narsapur, West Godavari district, Andhra Pradesh, India in a Niyogi family to Sattiraju Venugopala Rao and Surya Kantham. He has worked as a political cartoonist for the newspaper Andhra Patrika in 1945. He holds B.Com (1953) and BL (1955) from University of Madras.

Bapu introduced a painting style of simple bright colours. His unique style consisted of economy of strokes, freehand drawing and a lack of background clutter.

His paintings focus on Hindu mythological characters, and he has painted the Hindu epic Ramayana as a pictorial story. His character portrayals, such as Shiva, Bhima, Duryodhana, look distinctly male with wide chests, large jaws and large biceps; while Krishna and Rama are more feminine in build. Bapu has also introduced a new style of cursive writing in Telugu. The font is his own handwriting and reflects the same simplicity as his art.

Bapu's paintings also decorated the cover pages of many magazines in India and abroad. Telugu Naadi Magazine published from the USA for Telugu audience has published Bapu's great paintings. Bapu also later served on their advisory board to guide and have an outstanding content for the magazine that catered to Telugu people.

The most notable achievement in Bapu's movie-making is his success in capturing the nativity of the Telugu people and translating it into visuals. His movies center on realistic family issues and relationships; however, his recurring theme is magic realism, with vignettes of mythological characters aiding in the narration.

Most of his movies have a female protagonist; a breakaway style from the formulaic movies that relegate female lead characters to song and dance numbers. His penchant for preserving the Telugu nativity in his movies can be seen in the choice of artists, especially the dusky female leads and weak villains.

Baapuramaneeyum, the film-director-writer duo, Mullapudi Venkata Ramana and Bapu met in 1942 in P.S. High School, Madras. They studied there in standards V and VI and then continued schooling at Kesari High School.

Ramana’s first short story 'Amma Maata Vinakapothe' was published in 1945 in 'Bala', a children's magazine published by Radio Annayya (Nyayapathi Raghava Rao), he was 14 then. Bapu illustrated the story. That was the beginning of their career as a writer-producer-illustrator-filmmaker duo.

Started as an illustrator-story writer team and then turning into a film-director-writer duo, they have contributed immensely to the enrichment of Telugu cultural ethos through literature and cinema. When one mentions Bapu, then one is bound to mention Ramana's name too and vice versa.

The most notable achievement in his movie-making is his success in capturing the nativity of Telugu people and translating it to great on-screen visuals. Whenever the renowned duo of Bapu and Ramana come together for a project, viewers expect a spectacular visual of nativity with an equally enthralling storyline.

Their mythological ventures like Sampoorna Ramayanam, Ramanjaneya Yuddham and Seeta Kalyanam have been the milestones of Telugu cinema, while historical films like Thyagayya, Bhakta Kannappa and Srinatha Kavisarvabhouma have been hugely successful.

Bapu-Ramana combination has created movie magic on the large screen with some of the path-breaking films in Telugu cinema and are ever remembered for films like Radha Kalyanam, Velugu Needalu, Bharyabharthalu, Bhogimanta, Mutyala Muggu, Sakshi, Mr. Pellam, Pelli Pustakam and Manavoori Pandavulu, which popularised actors of those days like Krishna, Krishnam Raju, Chiranjeevi and Ravu Gopalarao.

He has won two National Film Awards, 3 Filmfare Awards, six state Nandi Awards. In 1996, he appeared in the Doordarshan Documentary Eminent Cartoonists of India program. He gained international recognition through his artworks viz., Bapu Bomma, The Navarasas, and the Indian Dances etc., which were held at the National Film Theatre, London, in 1978, and at the innumerable Telugu Conferences in the United States. He has worked as a graphic artist for J Walter Thomson, Efficient Publicities and F. D. Stewarts, Chennai.

He has designed and illustrated several books for leading publishers in South India out of which, five received Government awards. He was also introduced to Bollywood actor Anil Kapoor in 1980. He has also directed 12 Bollywood films.

Bapu had suffered from a heart stroke many times throughout his career. He was admitted into a hospital at Chennai in mid of August 2014. He experienced a severe heart stroke on August 31, 2014, following which he passed away on the same day after battling with the acute illness.