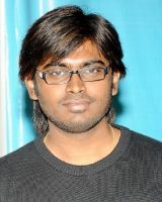 Deepu, is a South Indian playback singer. He has recorded several songs in Telugu. His hits include Satyam Emito – Athidi, Nachore – Yamadonga, Love U Raa – Chirutha, Nakosam Nuvvu – Magadheera, Hatthiri Entha – Gamyam and so on.

He was born on 10th April, 1986 as a younger child to Mr.Venkata chary and Sujatha. He learnt Carnatic vocals for 10 years. He initially got trained under Mr.K.Ramachari and Mr.Vyzersu Balasubramanyam. And learnt light music from Ramachari, who was a finalist on a TV reality singing competition. He graduated in 2007 with a Engineering degree in Information Technology from DVR College of Engineering and Technology, under the auspices of JNT University, Hyderabad. His sibling Praveen Kumar was also an upcoming music director in Telugu Film Industry.

Deepu’s first recording was for the movie 10th class in which he sang Jabilli Teliyadu. But he got recognition for the song Nachore from the movie Yamadonga which was a huge block buster in that year and even the song too. Later he sung for so many movies like Athidi, Chirutha, Maghadeera, Gamyam and so on. He was singing professionally since 5 years, sung in more than 40 films and worked with many music directors like M.M.Keeravani, Mani Sharma, Koti, M.M.Sreelekha, Ghantadi Krishna, Mickey J Mayer, Chakri and so on.