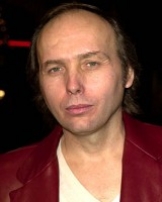 Dwight David Yoakam is an American singer-songwriter and actor, most famous for his country music. Active since the early 1980s, he has recorded more than twenty albums and compilations, and has charted more than thirty singles on the Billboard Hot Country Songs charts.

Yoakam was born in Pikeville, Kentucky, the son of Ruth Ann, a key-punch operator, and David Yoakam, a gas-station owner. He was raised in Columbus, Ohio, growing up with his mother and stepfather, who had a white-collar job in the automotive industry. He graduated from Columbus' Northland High School on June 9, 1974.

During his high school years, he excelled in both music and drama, regularly securing the lead role in school plays, such as "Charlie" in a stage version of Flowers for Algernon, honing his skills under the guidance of teacher-mentors Jerry McAfee (music) and Charles Lewis (drama).

Outside of school, Yoakam sang and played guitar with local garage bands, and frequently entertained his friends and classmates as an amateur comedian, impersonating politicians and other celebrities, such as Richard Nixon, who, at that time, was heavily embroiled in the Watergate controversy.

Yoakam briefly attended Ohio State University, but dropped out and moved to Nashville in the late 1970s with the intent of becoming a recording artist.

When he began his career, Nashville was oriented toward pop "Urban Cowboy" music, and Yoakam's brand of Bakersfield Honky tonk music was not considered marketable.

Not making much headway in Nashville, Yoakam moved to Los Angeles. Teaming up with lead guitarist and Producer Pete Anderson, Yoakam came to LA with the vision of bringing traditional, Honky Tonk or "Hillbilly" music (as he himself called it) forward into the 1980s. Yoakam wrote most of his songs himself, while Anderson had a hand in arranging the songs and shaping their direction.

Pete grew up in Detroit, Michigan, where his family had moved North to find work in the Michigan auto factories, a similar move to Yoakam's family's migration North from Kentucky. In Detroit, Pete picked up Blues guitar, being influenced by local Blues guitarists like John Lee Hooker. You can hear Pete playing some Hooker-inspired licks on Yoakam's cover of "Honky Tonk Man", on his debut album.

When Pete moved to Los Angeles, he had to pick up other styles of guitar playing in order to work, and he forged his Country style playing in local Country bands. Some of these bands lacked a Steel guitarist, and so he worked out one of his most distinctive techniques: imitating a pedal steel guitar on standard electric guitar.

Pete has tremendous skill and technique, rarely over-plays, and has added quite a bit to the unique, hard-hitting Country/Honky-Tonk sound Yoakam featured on most of his albums. Pete has always produced records for other artists, and left Yoakam's band to focus full-time on producing.

Continuing to perform mostly outside traditional country music channels, Yoakam did many shows in Rock and Punk clubs around Los Angeles, playing with roots rock or punk rock acts like The Blasters (Yoakam scored a small hit with his version of their song "Long White Cadillac"), Los Lobos, and X. This helped him diversify his audience well beyond the typical Country music fans; at many of his shows you would see mohawked and leather-clad Punks alongside Rock & Rollers, as well as the typical cowboy-shirt wearing Country crowd.

Yoakam's song "Readin', Rightin', Route 23" pays tribute to his childhood move from Kentucky, and is titled after a local expression describing the route that rural Kentuckians took to take to find a job outside of the coal mines (U.S. Route 23 runs north from Kentucky through Columbus and Toledo, Ohio and through the automotive centers of Michigan). Rather than the standard line that their Elementary schools taught "the three Rs" of "Readin', 'Ritin', and 'Rithmetic", Kentuckians used to say that the three Rs they learned were "Readin', 'Ritin, and Route 23 North"!

Yoakam has also taken some acting roles, most notably as the abusive alcoholic Doyle Hargraves in Sling Blade, (1996) and as a sociopathic killer in Panic Room (2002). He has also appeared in Southern California live theater, combining his acting talents with the talents of director Peter Fonda. He appeared in a cameo role as the doctor for Chev Chelios in Crank, and reprised that role in Crank_2:_High_Voltage. Dwight also had a small cameo role in the 2005 comedy movie Wedding Crashers. In 2008, Dwight played Pastor Phil in Four Christmases, starring Vince Vaughn and Reese Witherspoon.

Having diverged from pop-icon status in country-western fare, Yoakam is today more likely to be identified as having an older, more traditional style. At one point, Johnny Cash cited Yoakam as his favourite country singer. But along with his bluegrass and honky-tonk roots, Yoakam has written or covered many Elvis Presley-style rockabilly songs, including his popular covers of Queen's "Crazy Little Thing Called Love" in 1999 and Presley's "Suspicious Minds" in 1992.

He recorded a cover of the Clash's "Train in Vain" in 1997, as well as Cheap Trick's "I Want You to Want Me". Yoakam has never been associated only with Country music; on many early tours, he played with Hardcore Punk bands like Hüsker Dü, and, as noted above, played many shows around Los Angeles with Roots/Punk/Rock & Roll acts.

His middle-period-to-later records saw him branching out to different styles, covering Rock & Roll, Punk, 1960's, Blues-based "Boogie" like ZZ Top, and writing more adventurous songs like the almost cinematic "A Thousand Miles From Nowhere". In 2003, he provided background vocals on Warren Zevon's last album The Wind.

Country Music, a 2008 poetry collection by Allen Hoey, mentions Yoakam directly in several poems, uses titles of a couple of Yoakam's songs as titles of poems, and dedicates one poem to Dwight Yoakam. Yoakam currently resides in Southern California, but still maintains close ties with his family in the Columbus area.