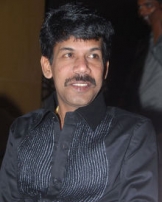 Bala is an Indian Tamil film director, screenwriter and film producer, working in the Tamil film industry. Widely credited with having revolutionized Tamil cinema, he is best known for his realistic, yet dark and disturbing films, considered landmark films, that have garnered high critical acclaim. He has received several awards and recognition for his work, including the National Film Award for Best Direction for his fourth feature film Naan Kadavul.

Bala was born on 11 July, 1966, in Periyakulam, Theni district, Tamil Nadu, India. He studied Tamil Literature at The American College in Madurai. He admitted that as a youngster, he was not interested in studies and had dropped out of his college days and was considered by many as he wouldn't come up in life.

At a certain point, he determined to prove himself to the society. After a struggling period, he came to Chennai and entered the cinema industry. Then soon he became one of the finest directors in the Tamil Film Industry because of his directing skills.

He started his film career as an assistant director for the famous National Film Award–winning director and cinematographer Balu Mahendra, where a close friendship between the two grew.

Bala is known for his later success. He made his directorial debut with Sethu in 1999, that gave a break to Vikram, the film's lead actor, who was also struggling in the Tamil film industry for almost a decade without a hit and recognition.

More than 60 distributors saw the film and hesitated to screen it because of its tragic ending. But after multiple preview shows, the film was released on a low profile note without any advertisement. But after the first days, the film started running to packed houses just through 'word of mouth'. The film was said to have initiated a 'new wave', as it received raving reviews and became a huge hit. Its stupendous success led to remakes in Kannada (Huchcha), Telugu (Seshu) and Hindi (Tere Naam) languages.

Bala's next film was Nandha which gave a career boost to Surya. His third film Pithamagan broke all the sentiments which were prevailing in Tamil cinema. In 2009, he released Naan Kadavul in Tamil featuring Arya and Pooja Umashankar, for which he won his first National Film Award for Best Director.