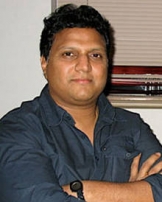 Mani Sharma Yanamandra is a music director known for his works in Tollywood. Before becoming a music director in Tollywood, Sharma used to work with M. M. Keeravani. He has composed music for over 100 films. He is popularly known as "Swara Brahma" for his contributions to music in Tollywood. He was the perfect person to give background score for Heroes.

Mani Sharma started his career as a Music Director in the year 1998 and from then he continued to score for more than 110 feature films. His music compositions of songs to the movies to the popular heroes stole the hearts of scores of fans for the heart-winning, crowd-pulling and foot-tapping numbers. His songs form the repertoire of all rank musicians today.

His songs have the sense of utmost delicacy and fashioned verse with sounds that merge with orchestral ecstasy. His music flowed spontaneously out of ecstasy. The compositions sprouted out of intense cross currents blend from tutelage and his vast experience came down from the years.

Mani Sharma was born in Machilipatnam, Krishna district of Andhra Pradesh. He spent most of his childhood in Chennai. Mani Sharma started his career as a keyboard player in the late 80'S under the guidance of renowned and popular Music Director Late Sri Satyam.

As a keyboard player, he extensively toured along with well-known Indian playback singer Sri S.P. Balasubramaniam as a member of his prestigious troupe and performed in live stage performances in India and abroad, including the USA, U.K, Australia, Europe, South Africa, Singapore, Sri Lanka & UAE, and so on.

As a freelance keyboard player, Mani Sharma worked with several famous music directors in all the South Indian languages, and also in Hindi, Oriya and Bengali. He got the first break as a music director in the year 97. With his talent, Mani Sharma established himself as a popular Music Director in the Telugu film industry in a short span of two years.

He has a vast experience in the small-screen industry by being instrumental in individually composing and giving assistance to many feature films, T.V. serials, documentaries, and advertisement media. He truly conveyed the message that fusion is good as long as there is no confusion.

Morning Raga is a classic example of Mani Sharma's innovative blend of modern with traditional. Having raked a few international awards, this experiment worked wonders as many believed that the true hero of the movie was the true Carnatic music with beautiful compositions that sounded super-cool with unique beats and echoing vocals.