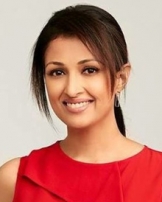 Gouthami Tadimalla (Gautami), is an South Indian actress. She has acted in Telugu, Tamil, Malayalam, Hindi and Kannada films. Her first film was Dayamayudu, a Telugu movie based on the life of Jesus Christ.
Gautami was diagnosed with breast cancer at age 35, and successfully fought against it.
Personal life
Gautami was married to businessman Sandeep Bhatia in 1998 with whom she has a daughter Subbalakshmi born in 1999. She divorced Sandeep Bhatia in 1999.
Since 2005, she and actor Kamal Haasan have been in a live-in relationship. The couple met on the sets of Apoorva Sagodharargal in 1989 and have since remained close friends.
Gautami and Kamal Are No Longer A Couple
She and Kamal have refused to marry each other, citing 'lack of faith in marriage' as the main reason. On November 1, 2016, Gauthami officially announced that she's getting separated from Kamal Hasan, taking her daughter's Life in concern.
Film career
She was studying at GITAM College in Vizag, Andhra Pradesh when she received her first film offer. She was introduced to Tamil films through Guru Shishyan, a film that also starred Rajnikanth.
She was most active in Tamil cinema from the late 80's to the mid 90's, and was a competitor to the other heroines of the time, Kushboo and Banupriya.Her filmography includes Thevar Magan, as well as Mani Ratnam's "Iruvar"(1997), which co-starred Mohanlal, Prakash Raj, Aishwarya Rai, Tabu, Nasser and Revathi.

She has acted also in Kannada films Elu Suttina Kote, Chikkejamana and Cheluva, and in the Hindi movies, Pyar Hua chori chori, Janata ki Adalat, Haiwan, Admi, Appoo Raja, Trimurti, and Dhaal. Prior to this, she had done a few movies in Malayalam, notably His Highness Abdulla (starring Mohanlal), and Dhruvam (starring Mammootty), Daddy (opposite Arvind Swamy), and Ayalathe Adheham (opposite Jayaram). Her role in Sukrutham was penned by the writer M.T.Vasudevan Nair.

She has acted in the Tamil serial "Indira" in the lead role of Indira. She made a guest appearance in the song 'Chikku Bukku Railu' with Prabhu Deva in the film Gentleman. Recently she has also hosted a talk show in Sun TV titled Anbudan which was launched to compete with Koffee with Anu running on STAR Vijay. She is currently acting in the serial abhirami which is telecasted in kalingar tv.
Comeback
She made a comeback to the film industry in the late 2000s as a costume designer for films starring her partner Kamal Haasan. She won the Vijay Award for Best Costume Designer for Dasavathaaram.
After sixteen years, she returned to acting by starring in the Tamil film Papanasam in which she was paired with her partner Kamal Haasan.