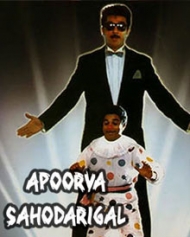 The story of twins who were separated during childhood grows up in different localities with one of them Appu being a midget working for circus. Appu comes to know that his father was an honest police officer who was killed by four criminals.
Rest of the film shows how Appu succeeds in avenging the death of his father and how Raja proves his innocence as he is blamed for the murders committed by Appu.
Apoorva Sagodharargal is a Tamil comedy-drama movie directed by Singeetam Srinivasa Rao. The film stars Kamal Haasan in three roles, as a mechanic, a circus clown who is a dwarf and a police officer, along with Gouthami and Rupini playing lead roles with Srividya, Manorama, Nagesh, Jaishankar, Nassar and Delhi Ganesh playing supporting roles.