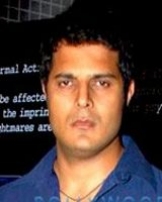 Malik was born in a Hindu Jat family of Bulandshahar.

Malik began his career as a runway model in the Indian fashion industry, and went on to model for leading suit brands, Vimal and Raymonds. This lead to music videos; most notable among them was Nusrat Fateh Ali Khan’s Afreen with Lisa Ray. He later appeared in Sonu Nigam's Deewana with Gul Panag.