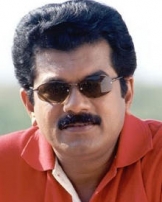 Mukesh, who hails from Pattathanam in Kollam town, did his schooling from Infant Jesus Anglo Indian High School in Tangasseri, and took his Bachelor of Science degree from Sree Narayana College in Kollam.

He is also a law graduate from the Law Academy, Thiruvanathapuram. Mukesh’s ex-wife Saritha was a leading lady and famous Tamil film actress who acted in several roles in south Indian films including the national award winning film Thaneer Thaneer in 1981. They are now divorced and are parents to two boys.

From an early age, Mukesh Babu showed an aptitude for performing arts and in particular proved to be a talented mono-actor. His mono-act and stage performances during school and college days led the way to his professional stage career in his family owned drama troupe, Kalidasa Kala Kendram, before becoming a movie actor.

He entered the Malayalam film industry through the movie Balloon in 1982. In 1985, he acted in Mutharamkunnu P.O. directed by Sibi Malayil, scripted by Sreenivasan with the story from Jagadeesh, which was noted. Then came a series of slap stick comedies often with Priyadarshan like Ponnum Kudthinu Pottu, Akkare Ninnoru Maran, Boeing Boeing and Odaruthammava Aalariyaam. His breakthrough came in 1989 with the movie Ramji Rao Speaking directed by Siddique-Lal.

Thereafter, he established himself as a lead actor of Malayalam film industry. In the early nineties, Mukesh along with Jayaram, Jagadeesh and Siddique acted along in a number of low-budget comedy movies to his credit. Many of them were commercial successes. His major hits were directed by duo Siddique-lal. Apart from Ramji Rao Speaking, they worked together in In Harihar Nagar, God Father, Hitler, Chronic Bachelor and Friends.

The characters he played were usually of a young man doing something fraudulent under the pressure of circumstances. The best example of a film with such a character is Sipayi Lahala (1995) by Vinayan and written by Sreenivasan who also stars in it as well.

His roles as a supporting actor along with Mammootty were acclaimed in movies such as Thaniyavarthanam, Dinarathrangal, Mahayanam, Hitler, Chronic Bachelor, Nair Saab, Sainyam and Sangham. He portrayed CBI officer Chacko in the four movies of CBI series directed by K. Madhu. He shares close friendship with Mohanlal and has acted in films with him such as Hello My Dear: Wrong Number, Thalavattam , Vandanam, Akkareakkareakkare, Kaakkakkuyil and Boeing Boeing.

In 2000's decade he struggled to find better roles with his passing age and his image. Although he has come back strongly with interesting roles in Udayananu Tharam, Goal, Vinodayathra, Boy Friend, Kaiyoppu, Naalu Pennungal and Katha Parayumpol.

Mukesh authored and published a book on his reminiscences and anecdotes from life. This book, in the Malayalam language, is titled Mukesh Kathakal - Jeevithathiley Nerum Narmavum.