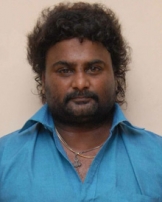 Huccha Venkat is an Indian actor, director and producer. He acted in a self-directed and produced movie Huccha Venkat in 2014. During the first show of the movie, when only handful of people turned up, he used a popular news channel to express his anger. The video went viral on YouTube among Kannadigas and gathered popularity for him.

There are several fan clubs, including Huccha Venkat Sene. He claims his first movie Swathanthra Palya to have shattered all the records, but it has never released. He made use of his father's hard earned money and invested it on his own movie and lost it all after its release. He was one of the contestants in Bigg Boss Kannada 3.

Huccha Venkat is being evicted from Bigg Boss for physically assaulting Ravi Murur in 'Varadha Kathe Kichchana Jothe' of week 3 on November 14, 2015. First time in Kannada Bigg Boss, Huccha Venkat becomes the first contested who has been evicted for violating the rules of the reality show.