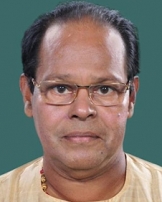 Innocent Vincent is a Malayalam actor who was born in Irinjalakuda in the Thrissur district of Kerala, India. He is one of the most successful and leading comedy actors of Malayalam cinema. He is noted for his witty mannerisms and dialogue delivery in the typical Thrissur accent.

He has proven his acting skills in serious and character roles in several films. He has been the president of Association of Malayalam Movie Artistes (AMMA) for 9 years. He has held the post for the last three consecutive terms.

Innocent entered the film industry in 1981. At first, he produced a few serious offbeat films, but he was not successful. In the long span of his career, Innocent has worked in around 500 films in a variety of roles, mainly in Malayalam. He has also done a few Tamil and Hindi films.

He proved his skills in serious roles with a touch of laughter in films such as Kabooliwaala, Gajakesariyogam, Mithunam, Mazhavilkavadi, Manassinakkare, Thuruppugulan, Rasathanthram, and Mahasamudram. His effort, along with that of the superstars who starred in these films, played an important role in their success.

His role as Warrier (a Hindu caste man) in Mohanlal-starrer superhits Devaasuram and its sequel Ravanaprabhu was noticed for its nuances in the performance. The role is considered by critics as one of his best. His pairing with K. P. A. C. Lalitha was successful in movies such as Pai Brothers, My Dear Muthachchan, and Manichitrathazhu.

Innocent is also one of the most imitated actors of Malayalam cinema and mimicry artistes have brought him closer to women and children among his fans. Innocent's participation in stage shows also guarantees him a leading role as an anchor or performer. His Kathaprasangam (a kind of oratory, combined with poetry) Olayaal Menjoru is one of the regulars in Gulf stage shows.

Innocent's name was heard in politics as an LDF-supported independent candidate from the Irinjalakkuda assembly constituency in the 2006 Kerala assembly elections. But nothing came of it. He made it clear he didn't have the mindset of a politician.

Innocent has published his memoirs in the book entitled Njan Innocent. He is also involved in the work of his collection of short stories. Innocent also writes columns in magazines and newspapers.