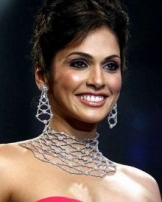 Isha Koppikar comes from a family of learned academicians, and she has also completed her course in Life Sciences from Ruia College in Bombay. After completing her college course, she starred in a Tamil movie (En Swasa Katre) opposite Arvind Swamy, which got her a lot of positive reviews.

She shot to fame after a modelling shoot with Gautam Rajyadhaksa when she was still in Junior College. Talented, stunningly beautiful and tall, standing at a majestic five feet seven inches in height, which is literally head and shoulders above the average Indian woman (and a lot of men, too!), she had better chances of becoming a leading lady opposite the taller Bollywood heroes.

Isha got her fame in Bollywood when she did the Ram Gopal Varma number (Khallas) in the movie named "Company", and since then has been referred to as the "Khallas Girl".

Today Isha towers over many Bollywood actresses, has come beyond just a sizzling "item" girl, and has become a household name. She fills the niche (and much more) created by the exit of another attractive Bollywood actress, Sonam.

Isha's name bounced back into limelight when she starred in a controversial film named "Girlfriend", which is the story of two lesbian lovers - a subject that is still very taboo in India and some other parts of the world.

Isha was nominated for her part in "Qayamat" in which she plays a negative role. She also received accolades for her role in "Pinjar".