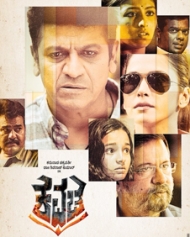 Shivarajkumar playing the main lead role in this movie.

Shivarajkumar is a visually-challenged man, who works as a lift operator in an apartment in the city. He has a special ability to sense even the slightest sound, smell, and touch.

One day, he witnesses a murder which happens in the apartment, but the real killer escapes and Shivarajkumar gets arrested on the basis of circumstantial evidences. How he proves his innocence forms the crux of the story.