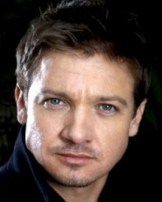 Jeremy Lee Renner is an American actor and musician, born January 7, 1971 in Modesto, California. The eldest of four children, Renner has two sisters and one brother.

Jeremy Renner has made a career out of playing charismatic anti-heroes. Renner has portrayed an Eighteenth Century vampire, a gun toting alcoholic, and a notorious serial killer, among other film roles.

In addition to having done extensive theater work, Renner has starred in several major independent films, including the upcoming 2009 Iraq war thriller, The Hurt Locker (directed by Kathryn Bigelow), and Dahmer (which earned Renner his first Independent Spirit Award Best Actor nomination[3]), as well as The Assassination of Jesse James by the Coward Robert Ford and 28 Weeks Later. Jeremy Renner has been nominated for best actor for the second time at the 2009 Independent Spirit Awards for his leading role in The Hurt Locker along with fellow Hurt Locker actor Anthony Mackie who has been nominated for best supporting actor.