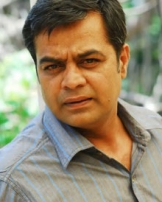 Achyuth Kumar is an Indian actor who predominantly works in Kannada cinema. Born and brought up in the town of Tiptur, in the district of Tumkur, he graduated with a bachelor of commerce from the Kalpatharu First Grade College, which was then under the University of Bangalore.

He is well known for his performances in the films Sidlingu and Lucia, and he has won 3 Filmfare Awards and 2 Karnataka State Film Awards, one each in the best supporting actor and best actor categories so far.

Achyuth Kumar began training as an actor at Ninasam in the Shimoga district of Karnataka. Working in theatre at the time, he was chosen by Girish Kasaravalli to portray a pivotal role in his television soap opera Gruhabhanga in 2000. In Moodala Mane, he played a supportive colleague to the daughter of the protagonist. In Preethi Illada Mele, he played the eldest son of a judge (played by Anant Nag).

Kumar's career in films began in 2007 when he signed on to play the father of the female lead in Moggina Manasu and the gangster Oil Kumar in Aa Dinagalu, both Kannada films. He went on to gain a reputation as a character actor and appeared in around 12 films per year.

He also appeared in a couple of Tamil films. However, it was in the 2013 film Lucia that he received widespread appreciation. In the film, he played the role of Shankaranna, who owns a movie theatre and is the employer of Nikhil, the lead character, played by Sathish Ninasam. His performance won him the Filmfare Award for Best Supporting Actor.