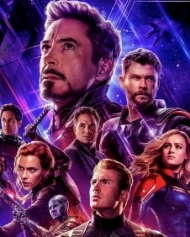 Avengers : Endgame is an American superhero film produced by Marvel Studios. Based on Marvel comics ,this movie is the direct sequel to 2018's Avengers: Infinity war. Directed by Anthony Russo and Joe Russo ,this film falls 22nd in the Marvel Cinematic Universe (MCU).
Prelude -
Thanos acquires six infinity stones after breaking the ranks of Avengers. And he wipes out half of the population of the universe and creates ruckus in the world. The remaining injured Avengers reunite once again to take on the mighty Thanos.
A glimpse of devastation set by Thanos
Clint Barton loses his family along with half of the universe. T'challa of Wakanda, Groot, Maximoff, Wilson, Mantis, Drax, Quill Strange, Peter Parker, Maria Hill, and Nick Fury also disintegrate with the half of the universe. Stark and Nebula remain on Titan, later rescued by Carol Danvers. And remaining Avengers are left on Wakandan battlefield. And injured Thanos finds himself in another planet watching Sunrise.
Action Begins
After three weeks, the United Avengers find Thanos in a hope to retrieve Infinity stones and reverse his actions. But Thanos has already destroyed them and he himself was in a badly injured condition. Angry Thor decapitates Thanos. What is the solution now?
Solution Flashes - 5 years or 5 Hours?
Scott Lang or Ant-Man came out of the Quantum realm after five years, but for Scott, it's just 5 hours. Scott finds Rogers and Romanoff, and proposes that the Quantum Realm can allow time travel and they can get infinity stones by travelling to the past. The plan gets the further nod by Tony Stark who agrees after initial refusals and he designs a device that stabilizes time travel.
Acquisition Of Infinity Stones and Split up Avengers on mission
Bruce Banner, Rogers, Lang and Stark time travel to New York City in 2012.
a.Time stone -
Banner visits Sanctum Sanctorum and gets Time stone by convincing Ancient one.
b.Mind Stone -
Rogers retrieves Mind Stone by overcoming Hydra agents and his 2012 self.
c.Space Stone -Lang and Stark try to steal Space Stone, but Loki escapes with it. then Rogers and stark further time travel to Us Army camp in 1970 and steal an earlier version of Space stone.
d.Reality Stone - Thor and Rocket time travel to Asgard and gets reality Stone from Jane Foster and Thor also gets earlier version of his hammer Mjolnir.
e.Soul Stone - Grieved Barton and Romanoff time travel to Vormir in 2014,And On the advice of Red Skull, the stone keeper, Romanoff sacrifices herself so that Barton can go back with Soul stone.
f.Power Stone - Nebula and Rhodes time travel to Morag in 2014 and steals the Power Stone. Rhodes returns to present with Power Stone, But Nebula fails to after her cybernetic implants interface with those of her 2014 self, And through this Thanos learns Present Day actions and sends 2014 version of Nebula to Present .
Final Battle
Using All Infinity Stones, Banner restore Everyone that Thanos disintegrated. And 2014 version Nebula sends Thanos and his ship to present using Time Travel. Thanos Attacks the Avengers' Compound and Overpowers the Rogers, Thor, And Stark. He also summons the Black order and his forces to lay siege on Earth. Meanwhile, Present-day Nebula convinces 2014 version Gamora to kill herself and turn on Thanos.
The restored Doctor Strange using his magical rings transports all Avengers' allies and the Armies of Wakanda and Asgard to the Avengers' Compound to fight against Thanos and his army. In the end, Stark uses Infinity Stones to disintegrate Thanos and his army and in the process mortally wounds himself and finally succumbs to Injury.
Aftermath
With Stark no more, Thor leaves Asgard appointing Valkyrie as the queen and joins Guardians Of The Galaxy. And Rogers returning Infinity Stones to their original position in time and time travel to 1943 to live with his love Peggy Carter. Present Day elderly Rogers passes his shield to Sam Wilson who becomes Next Captain America.