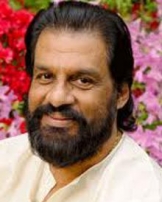 Kattassery Joseph Yesudas or Jesudas is an Indian classical musician and a leading playback singer.

His voice lends itself well to both Indian classical, devotional and popular songs. He has recorded more than 40,000 songs in many languages, including Tamil, Hindi, Malayalam, Kannada, Telugu, Bengali, Gujarati, Oriya, Marathi, Punjabi, Sanskrit, Tulu, Russian, Arabic, Latin and English through his long career.

He has been singing for most Indian languages, except Assamese and Kashmiri. In his heyday, he was known as the Jim Reeves of South India. Fans term his voice as nothing short of "divine".

K. J. Yesudas was born in Fort Kochi, Kerala, to Augustine Joseph and Elizabeth. His father, who was a well-known Malayalam classical musician and stage actor, was his first guru. Later, he joined the Music Academy in Thrippunithura and underwent training.

For a brief period, he was with Sri Vechur Hari Hara Subramania Iyer, after which he took training from Chembai Vaidyanatha Bhagavatar, a maestro of classical music. Although he is a Carnatic music expert, he mastered in Hindustani music as well.

Yesudas began his career in playback singing in Kollywood in the early 60's; and by mid 70's, he entered Bollywood. He has bagged seven National Film Awards for the best singer category in the Indian film industry. In 2006, he sang 16 film songs in four South Indian languages on the same day at AVM Studio, Chennai.

Yesudas has performed in many major cities around the world. In his music concerts in the Middle East, he sings Arabic songs in the Carnatic style. He frequently dons the role of a cultural ambassador of India through his numerable performances abroad by promoting Indian music.

He is the only singer who has been accorded the title Asthana Gayakan (official singer) of Kerala state. He has been awarded the Padma Sri (1973) and Padma Bhushan (2002).

In 1965, he was invited by the Soviet Union government to perform at music concerts in various cities in the USSR and also sang a Russian song over Radio Kazakhstan. In 1970, he was nominated to head the Sangeetha Nataka Academy of Kerala and was the youngest person ever to occupy that post.

In 1971, Yesudas with his musical troupe travelled all over Kerala to raise funds for the Indian Prime Minister's National Defense Fund during the Indo-Pakistan War. He also became the senate member in the International Parliament for Safety and Peace.

He has taken the words of Sree Narayana Guru, "One Religion, One Caste for all humans" to heart. On November 14, 1999, Yesudas was presented with an honorary award by the UNESCO for "Outstanding Achievements in Music and Peace" at the "Music for Peace" event in Paris, a concert held to mark the dawn of the new millennium and whose attendees included artistes such as Lionel Richie, Ray Charles, Montserrat Caballé, and Zubin Mehta.

Shree Narayana Guru’s great message, "One caste, One religion and One God for all Humans", influenced young Yesudas in his dealings with his fellow men. He had his own heroes among the musicians too. Mohammed Rafi, Chembai Vaidyanatha Bhagavatar and Balamurali Krishna are the ones he admired the most.

Yesudas is married to Prabha for more than 30 years. They have three sons, Vinod, Vijay and Vishal. The second son Vijay Yesudas, is a budding musician. The family is currently settled in Chennai and Kerala. He also owns estates in Fort Lauderdale, Florida, USA, and Flower Mound, TX, USA, for personal and business reasons.

In 1980, Yesudas established the Tharangni Studio at Trivandrum. In 1992, the office and studio were moved to Chennai and the company was incorporated in the US in 1998. Tharangni Studio and Tharangni Records became a recording center in Kerala which, for the first time, brought out audio cassettes of Malayalam film songs in stereo. The record company also had a voice mixing studio in Chennai, Studio27. The studio continues to produce and present events of Yesudas, both for film and Indian classical music concerts throughout the world.