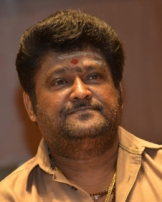 Jaggesh is an actor in the Kannada film industry, known for the comedy roles he portrays in his movies. He has acted in movies such as Super Nan Maga and Tharle Nan Maga. Jaggesh has a big fan following and is popularly referred to by his fans as Navarasa Nayaka.

Jaggesh is a versatile comedy actor in the Kannada film industry, known best for his unique dialogue delivery and his mannerisms. He uses, among other varieties of humour, scatological humour. Most of his movies are a laugh riot.

He started his career in the movie industry in the early 80's by playing minor roles. He got his big break as a hero in Tharle Nanna Maga, since then he has been one of the most sought-after actors in the Kannada movie industry.

Jaggesh is originally from a village called Mayasandra (Jade Mayasandra) of Turuvekere Taluk in Tumkur district. His political affiliation is towards Congress party. He contested from Turuvekere constituency, and won with a healthy margin.

Mr. Jaggesh tendered his resignation to the Speaker of the Legislative Assembly, Jagdish Shettar, and on the acceptance of the resignation, he officially crossed over to the BJP. With this, the number of MLAs from the Opposition parties who have quit their Assembly membership and joined the BJP in the last few years increased.

Jaggesh, formerly known as Eswar, married Parimala. Their's was the first marriage case from south India to reach the Supreme Court. It was a love marriage, where the bride was underage and the Honorable Chief Justice Bhagwati allowed for the marriage to be recognized on a humanitarian basis.

Jaggesh has two sons - Guru Raj and Yathi Raj. Guru Raj has written the script for their home production Make Up. He has completed successfully his training from the famed Kishore Namit Kapoor Acting Institute, in Mumbai.

Yathi Raj is a well-established child artiste with close to 15 movies to his credit, including his touching performance in the movie "Deadly Soma", directed by Ravi Srivathsa. Parimala Jaggesh and son Guru Raj Jaggesh are also known for their interest in cars, drag racing and rally.

Jaggesh at once was the highest paid actor amongst non-lead roles in the Kannada film industry, which is now overtaken by 'Rangaayana Ragu'. This was when he was very popular for his negative roles that had highly popular dialogues.