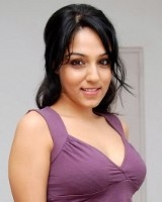 Lekha Washington is an Indian actress and sculptor.

Lekha Washington was born and brought up in Chennai, India. She is part Maharashtrian, part Italian and part Burmese. She worked on a couple of ads before becoming a VJ.

A qualified film-maker from NID, Ahmedabad, Lekha began her career as a theatre artist. In 2006, she became a VJ on SS Music, and hosted the popular show PCO and later Connect. She is also a sculptor, having held her first solo exhibition at the age of 18. She started by playing the leading role in the film 'Framed', directed by independent director Chetan Shah.

She anchored the first IPL cricket tournament telecast on Sony TV. She subsequently went on to host the Canadian 20/20 on international television. Her first release Jayamkondaan, in which she played the protagonist alongside Vinay Rai, won her accolades as she "performed a subtle and complex character with elan".

In February 2009, Lekha made her entry into Bollywood when she was chosen to play Rajeev Khandelwal's leading lady in "Peter Gaya Kaam Se", produced by UTV Spotboy.