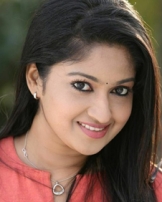 Mithra Kurian is an Indian film actress who appears in Malayalam and Tamil films. She first appeared as a child artist in Mayookham(Malayalam). Later she did two tamil films in that one is director Siddique's Sadhu Miranda.

Mithra subsequently appeared in notable Malayalam film, and gained considerable attention, by her choice of characters in films like Gulumal: The Escape and Bodyguard. She did a lead role in Gulumal, then she appeared as a supporting character in Bodyguard(Malayalam). Siddique again selects her to reprise the role in its Tamil remake Kaavalan. Now she is doing a malayalam movie titled London Dreams.