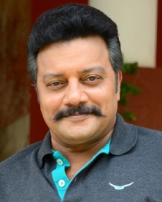 Sai Kumar is an Indian Tollywood and Kannada-language film actor who speaks the Telugu language. He is a South Indian hero and campaigner of the Bharatiya Janata Party in Karnataka. He belongs to a middle class family and started his career at an early age of his life as a dubbing child artist. His father is P J Sarma, who was a leading dubbing artist. Sai Kumar followed his father's foot steps with dubbing, who is considered as the dubbing king.

“My aim and ambition since my childhood is to become a versatile actor. As a child artiste I had the privilege of acting with well-known stars of that time. Director Bapu gave me an important lead role in Sneham the re-make of Hindi silver jubilee film Dosti. I continued with my film assignments, dubbing and my studies. I passed out with flying colors from Madras Christian College. I also did my M Phil from the MCC,” said Sai Kumar in an old interview.

Sai Kumar says he likes dialogues with sentiments and emotions. “I like melodrama. For me a film character is larger than life. A bit of exaggeration. I like the dialogue delivery of stars like Sivaji Ganeshan and N T Rama Rao.”