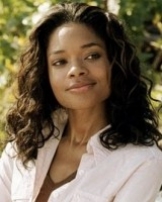 Naomie Melanie Harris (born 6 September 1976) is an English screen actress known for her starring role as Selena in 28 Days Later and her supporting turn as Tia Dalma in the second and third Pirates of the Caribbean movies.

Personal life
Harris was born and raised in London, England, the daughter of sitcom writer Lisselle Kayla, a single mother who had emigrated to England from Jamaica as a child. After graduating in 1998 from Pembroke College, Cambridge with an undergraduate degree in social and political science, Harris trained at the Bristol Old Vic Theatre School. Harris is a Buddhist.

From an interview with Daily Mail: "Naomie has overcome all manner of adversity - a single-parent upbringing in North London's Finsbury Park, bullying at school, a miserable stint at Cambridge where she says she cried every day of her three-year degree course - to become one of Britain's unlikeliest celebrities." She had a very difficult time as a student at Cambridge. "When I went to Cambridge University, Mum said I wouldn't fit in and she was right," she explains. "I hated it. The people there were so different to me. They talked about Eton and skiing and here I was, this black girl from Finsbury Park. I just felt so lonely. There was only one other black person in my year; I was very unhappy and cried every day."

Career
Harris has appeared in television and film since she was nine, including a stint on the remake of the science fiction series The Tomorrow People. She became internationally well-known in 2002 with her lead performance in Danny Boyle's post-apocalyptic film 28 Days Later, opposite Cillian Murphy. In the same year, she starred in the television adaptation of Zadie Smith's White Teeth.

Since then, Harris has been cast primarily in supporting roles in big budget films, such as Pirates of the Caribbean: Dead Man's Chest, Pirates of the Caribbean: At World's End, and Michael Mann's Miami Vice. She also did a comic turn in Michael Winterbottom's well-regarded indie ensemble piece, A Cock and Bull Story, and will appear with Josh Hartnett in the 2008 release of August. She starred in Channel 4's adaptation of the novel Poppy Shakespeare which was first shown on 31 March 2008.