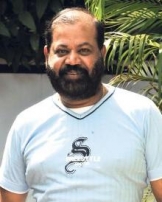 P. Vasu is a popular South Indian film director, writer, and actor who has produced many hits and delivered many blockbusters. His movie Chandramukhi played for 800 days in a theater in Chennai.

Vasu also acts in other films. He usually portrays a supporting role or an antagonistic role.

Vasu's father Peethambaram worked as a make-up man for M. G. R. and N. T. R. in their films in older days. Peethambharam died on 21 February 2011 at the age of 89. Vasu is married to Shanthi and has a son, Sakthi Vasu who is an actor. Vasu's brothers are Vidyasagar, Vimal and his sisters are Vanaja and Vijaylakshmi.

In 1978, Vasu joined director Sridhar as an assistant. Vasu started his career with Santhana Bharathi as a co-director and made films like Panneer Pushpangal, Mella Pesungal, Sahasame Jeevitham, Neethiyin Nizhal, and Madhumalar. Both got separated and did independent films even though they were friends.

P. Vasu is known as a thaali sentiment director, as his films contain artificial sentiments that revolve around mother, sister, brother (innocent man tying thaali to his lover without knowing anything about it, women's hair being cut, husband tying thaali to his wife before dying), etc.

His films like Panakkaran, Nadigan, and Paramasivan are based on the Hindi films Laawaris, Professor and Kartoos. He remade three Malayalam films, Manichitrathazhu, Bharatham, Katha Parayumbol in Tamil as Chandramukhi, Seenu and Kuselan, respectively.

His films with Prabhu, Sathyaraj, and Rajinikanth were super-hits. He didn't direct Kamal Hassan but acted with him in Dasavathaaram.