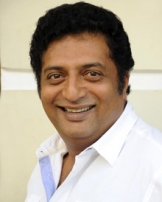 Prakash Raj was born Prakash Rai in Mangalore and his mother tongue is Tulu. Now he has shifted his base to Chennai due to numerous offers from Telugu and Tamil films. He was persuaded to change his last name from Rai to Raj by veteran South Indian director K. Balachander.

Prakash Raj studied in St.Joseph's High School in Bangalore. He won the President's Scout award in 1982. At school he was well known for his talents which brought him and the school numerous honours; he was also an active member and a good leader. He later joined St. Josephs College of Commerce, Brigade Road, Bangalore, where he participated in many plays, most of which were in Kannada. He was also good in debates.

He has acted in Kannada ,Tamil, Malayalam, Telugu and Hindi films. His original name 'Prakash Rai' in Kannada films was rechristened to 'Prakash Raj' by K. Balachander for Prakash Rai's debut movie 'Duet'.

Prakash Rai began his acting career with Kannada Doordarshan serials like Bisilu Kudure and Guddada Bhootha. He later took up small supporting roles in Kannada films like Raamachari, Nishkarsha, Lockup Death and was noticed for his dialogue delivery and histrionics.

His breakthrough role came in the form of Harakeya Kuri starring Vishnuvardhan and Geetha, directed by K S L Swamy. His performance in the movie was noticed by Geetha and she in turn introduced him to her mentor, the noted director K. Balachander. Prakash Rai re-entered Kannada films with a bang through Nagamandala in 1997, directed by T.S. Naghabarana.

Prakash Rai is a very famous actor in South India for a wide variety of roles he has performed, most notably as a villain and of late, as a character artiste, in Tamil and Telugu films. He is considered to be one of the most natural actors in the film industry, and has a good reputation for his acting skills. He is also the highest paid villain in Indian cinema. He was also a part of Mani Ratnam's stage show, Netru, Indru, Naalai.

One of Prakash Rai's greatest hits was his role of a villain in the Telugu film Okkadu, After Okkadu, Prakash Raj was flooded with offers. The versatile actor then co-starred with major stars and also acted in movies with newcomers. His 2007 production Mozhi, where he played an important role, was a box office hit and praised by critics proving that he can play a comedy role just as good as playing a negative character.

Most of the movies he produced are box-office hits and also are critically acclaimed. His movies are generally acclaimed by the audience as good-quality movies and are also considered as family entertainers. Also, as a producer his selection of movies typically have natural storylines.

His movie named Poi (lie in English) which is directed by his mentor and veteran director K. Balachander, who is incidentally directing his 101st film was a non grosser. It had Uday Kiran as a hero. Both Director K Balachander and Producer Prakash Raj acted in this movie as Good and Bad.

In an interview to a Tamil Satellite Channel he said he is agnostic. He dubs for his characters in various languages he plays. He is well versed in Tulu, Tamil, Malayalam, English, Kannada and Telugu. He considers K. Balachander as his mentor.