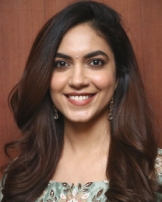 Ritu Varma is an Indian film actress from Telangana who mainly works in Telugu cinema. She is best known for her performance in the award-winning short film Anukokunda and the movie Pelli Choopulu, which elevated her into overnight fame.

Ritu Varma was born and brought up in Hyderabad. Her mother tongue is Telugu. She did her education in Hyderabad and holds a bachelor's degree in engineering from Malla Reddy Engineering College. After completing her graduation, she took part in the Dabur Gulabari Miss Rose Glow pageant and was declared the first runner up.

Ritu Varma rose to fame after her performance in the short film Anukokunda. The short film won the Best Film award at the 48HR Film Project competition in 2012 and also fetched Ritu the Best Actor (Female) award. The short film was later screened at the Cannes Short Film Corner in 2013.

After her appearance in Anukokunda, she entered the Telugu film industry. She signed her first Telugu movie Prema Ishq Kaadhal in which she played the role of a costume designer opposite Sree Vishnu. Her next release was Naa Rakumarudu, which was followed by Yevade Subramanyam, for which she was nominated as Best Supporting Actress (Female) at IIFA Utsavam. She has signed a Tamil project, China. Her Pelli Choopulu, is a romantic-comedy Telugu film starring Vijay Deverakonda.

Impressed with her performance in Pelli Choopulu, director Gautham Menon opted her as the lead lady in his upcoming Tamil flick with Vikram, Dhruva Natchathiram.