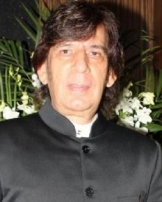 Razzak Khan was a film actor appearing in Bollywood films and noted for supporting and comic roles.

He is known for his comic role of Manikchand in the 1999 Abbas-Mustan-directed film Baadshah, as Ninja Chacha in the 1999 film Hello Brother and as Takkar Pehelwan in Akhiyon Se Goli Maare.

He has acted in more than 90 films. He had many memorable roles in his films which broke everyone to laughter with his funny gimmicks, expressions and brilliant comic timing. Razzak Khan was also seen playing the role of Bua's husband in the comedy show Comedy Nights With Kapil.