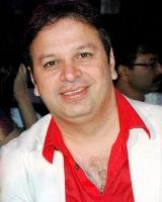 Roshan Abbas is a TV and radio host in India.

Roshan Abbas is an alumnus of La Martiniere College, Lucknow. He is a radio and television game show host and head of an events management company.

Roshan Abbas started Encompass in 1999. and grew from a creative event agency to an experiential marketing agency that is now aligned with the JWT network.

He has worked on engagement plans, brand launches and activation campaigns for companies like Hewlett-Packard, Nokia, Colgate Palmolive, HSBC and Pepsi.

As a radio jockey he created over 3000 hours of radio programming winning four awards at the Radio and Television Artiste Awards in India.[citation needed] Having enjoyed a career as a successful TV host for shows like ‘Family Fortunes’, ‘Born Lucky’ and ‘This is Your Life’ he has also been awarded as ‘Best Television Show Host’ at the Annual TV Awards in 2001.

Roshan serves on the promo jury for Cannes Lions 2008.