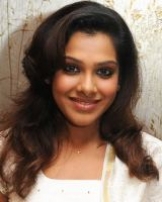 Sandhya is a South Indian actress renowned for her expressive face. Her real name is Revathy, but she uses the name Sandhya because there is an actress named "Revathy" in South Indian film industry. She was born in Kerala on September 27th, 1989, but brought up in Chennai, Tamil Nadu.

Her father was transferred to Chennai when she was two years old. Her father is a bank employee, while her mother is a beautician. Her brother is studying in SRM College, Chennai. After her superb performance in her first movie, "Kadhal", opposite Bharath, she was often referred to as Kutty Kajol, a famous Bollywood actress.

Sandhya was an ordinary school-going shy girl until she starred in the critically acclaimed Tamil love story Kaadhal. Initially, this role was offered to Gopika, also a Malayalam actress. Due to the date problems, this role went on to Sandhya.

One day she was spotted by film director Balaji Sakthivel and was offered the female lead role in Kaadhal. She planned to do the Visual Communications course after her plus two. However, due to her rising fame, especially after the super-hit Dishyum, for her second Tamil film, she had to discontinue her studies even before passing her 10th standard.

After Kaadhal, for which she won the best Filmfare South actress of 2004, she took up a Malayalam film titled Alice in Wonderland. Then came the musical romance Dishyum with Jeeva.

She was also a part of Mani Ratnam's stage show, Netru, Indru, Naalai. In her third Tamil film, Vallavan, she had only a small role, and the film had only modest box office success.

She also acted in Koodal Nagar with her former co-star Bharath and a Selvaraghavan film. She was approached for the voice-over of Shriya's character in Sivaji; but at the last minute, Shankar preferred actress Kanika's voice.