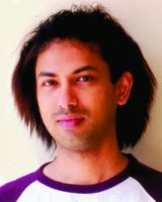 Joshua Sridhar is a composer of Film Scores and Soundtracks in Indian cinema. His debut film was Kaadhal, a Tamil film.

Early Life:
Born in Chennai in the year 1974 to M.K.Saravanan and S.Rajalakshmi. Studied at Bharatiya Vidya Bhavan's Rajaji Vidyashram in Chennai from 1980 to 1990. After finishing high school he studied western classical music for 2 years.

Before Films:
Began his career in the year 1993 composing, arranging and programming music for gospel albums and jingles. In the year 1996, he entered the film industry. Worked as a keyboard player/programmer for many film composers in the South between the years 1996 to 2004. In 2004 made his debut as a film composer for the Tamil film 'Kaadhal'