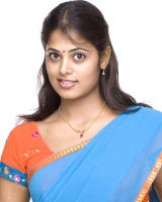 Sindhu Menon is an Indian actress, who has mainly appeared in Telugu, Kannada, Malayalam and Tamil films. She debuted as a child artist in the 1994 Kannada film Rashmi.

Sindhu Menon was born in Bangalore, Karnataka, India, in a Malayali family. She has one younger brother, Karthik, who worked as a Kannada music channel VJ and turned actor. Menon is able to communicate fluently in several languages, including Malayalam, her mother tongue, Telugu, Tamil, Kannada, Hindi and English. She was also brought up in her birth place, Bangalore, where she pursued studies at the Sheshdaripuram College.

Sindhu Menon, a trained Bharatanatyam dancer from her childhood, got her entry into the film industry, when Bhasker Hegde, one of the judges of a Bharatanatyam competition, in which Menon participated and emerged as the winner, introduced her to Kannada film director K. V. Jayaram, who cast her in his film Rashmi in 1994. Subsequently, she got several offers to act and became a "full-time actress" by enacting the female lead role character in the 1999 film Prema Prema Prema, when she was merely 13 years old.

Later, at the age of 15, she entered the Telugu, Malayalam and Tamil film industries as well, by acting in the films Bhadrachalam, Uthaman and Samuthiram, respectively. She went on to act in Bharathiraja's Kadal Pookkal (2002), Trinetram (2002), Khushi (2003) and got the female lead role in the 2006 Malayalam film Pulijanmam, which was awarded the National Film Award for Best Film in 2007.

Menon, then moved to "small screen" hosting TV shows and acting in serials, which include "Sriman Srimathi" and "Stree Hrudayam", before accepting film offers again. Currently, she is acting in Malayalam films, and has acted in movies such as Bharya Onnu Makkal Moonnu and Rahasya Police. She has acted in the Tamil film Eeram, produced by popular Tamil director S. Shankar.