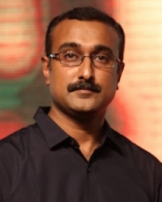 Rajeev Reddy Yeduguru is an Indian film producer and distributor. He is one of the most successful Telugu film producers. He produces his films along with his two partners and friend Radhakrishna Jagarlamudi, Sai Babu Jagarlamudi, Suhasini Panguluri, under First Frame Entertainments banner.