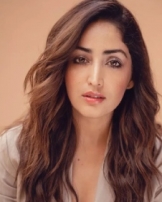 Yami Gautam, is an Indian actress and former television artist, who mainly appears in Bollywood and South Indian cinema. She is better known for Hindi film debut 'Vicky Donor'.

Yami Gautam and Diretor Aditya Dhar got married on June 4, 2021.

Yami came to the industry as a television actress and appeared in several Tv series like Chand Ke Paar Chalo, Raajkumar Aaryyan and Yeh Pyar Na Hoga Kam. She made her debut in Kannada film in 2010 enacting a lead role in Ullasa Utsaha. Later, in 2011 she entered the Telugu Film Industry, essayed the lead role in Ravi Babu's Nuvvila.

After making her debut in the Kannada and Telugu film industries, she later moved to Bollywood. In 2012, she made her Bollywood debut with the film Vicky Donor. The film was directed by Shoojit Sircar and also starred Ayushmaan in the lead role opposite Yami Gautam. Produced by actor John Abraham, the film was a commercial success and collected Rs 41 crore at the box office.

In 2015, she worked with Varun Dhawan in the film '  Badlapur'. Billed as an action -thriller the film was directed by Sriram Raghavan and starred Varun Dhawan and Nawazuddin Siddiqui in the lead roles. The film also featured Yami Gautam and Huma Qureshi in the female lead roles.

Later on, she appeared in films like Sanam Re,  Junooniyatat and Kaabil. Her next film was Uri: The Surgical Strike. Released in 2019, the film was directed by Aditya Dhar and starred Vicky Kaushal, Mohit Raina and Paresh Rawal in the lead roles. The film also marked her first collaboration with husband and director Aditya Dhar .