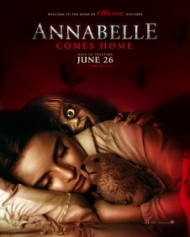 Annabelle Comes Home is a supernatural horror film from the Conjuring universe. Helmed by debutant Gary Dauberman, this film serves as a sequel to 2014 and 2017's Annabelle films. Patrick Wilson produced the movie while Warner Bros. Pictures along with New Line Cinema distributed the film worldwide.