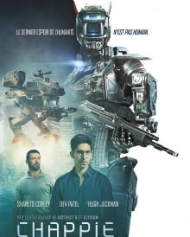 Chappie, an experimental robot built and designed to learn and feel, must fight back against forces planning to take him down.