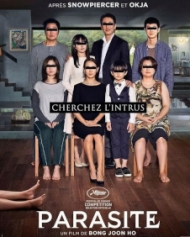 Parasite is a South Korean dark comedy movie directed and co-produced by  Bong Joon-ho. It stars Song Kang-ho, Lee Sun-Kyun, Cho Yeo-Jeong and Choi Woo-Shik in the lead roles. Jung Jae-il composed the music. It follows the members of a poor family planning to become employees of a rich household. It received many nominations in several film festivals like Academy Awards, Golden Globe Awards, British Academy Film Awards and others.

Plot: Parasite follows, the Kim family as they create a plan to leach off the wealth family Parks. The story takes a turn when their symbiotic relationship is threatened by another family. What happens is the result of desperation, love and their vastly different situations.