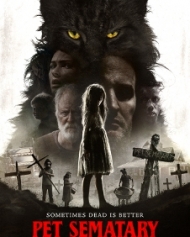 A | 1 hrs 41 mins | Horror Thriller
Release Date : 12 Apr 2019 (India)
05 Apr 2019 (WorldWide)
Cast : Jason Clarke, Amy Seimetz
Director : Kelvin Kolsch
Synopsis
Pet Sematary is a supernatural horror film based on a 1983 novel of the same name by Stephen King. Directed by Kevin Kolsch and Dennis Widmyer, this movie released in the USA on April 5, 2019, and garnered mixed reviews.  The movie succeeded in enthralling the audience with its dark tone and subtle scary scenes.

Louis Creed and his wife relocate from Boston to a small town Maine with their two kids and a cat. Soon, they come to know about a pet sematary in their neighbourhood. After some days, their pet cat 'Church' is killed by a truck and Louis buries it in the neighbourhood sematary. Soon, some horrific chain of events happens and unleashes an unstoppable evil. How this evil affects Louis and his family forms the rest of the story.