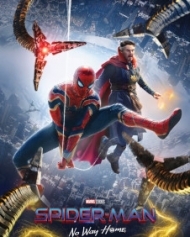 Spider-Man: No Way Home is an American superhero movie and the 27th film in the Marvel Cinematic Universe. The flick is directed by Jon Watts and produced by Columbia Pictures with Marvel Studios. The film stars Tom Holland in the titular role and Zendaya, Benedict Cumberbatch, Jon Favreau, Jacob Batalon and Marissa Tomei in prominent roles.
Story: At the end of `Spider-Man: Far From Home', Mysterio reveals the identity of Spider-Man to the general public. Our friendly neighbourhood web-slinger life turns upside down. Peter Parker, longing to get back to his earlier life, asks Doctor Strange to help him restore his secrete identity with magic. But soon, the duo faces serious repercussions of it.