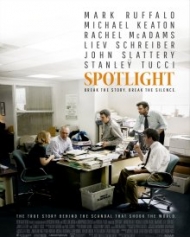 A | 2 hrs 10 mins | Drama
Release Date : 18 Feb 2016 (India)
18 Feb 2016 (WorldWide)
Cast : Mark Ruffalo, Michael Keaton
Director : Tom McCarthy
Synopsis
Spotlight is a 2015 American drama film directed by Thomas McCarthy and written by McCarthy and Josh Singer. It is about The Boston Globe's "Spotlight" team, the oldest continuously operating newspaper investigative unit in the United States. The film depicts the team methodically uncovering a pattern of sexual abuse of children by Roman Catholic priests in Massachusetts and an ongoing cover-up by the Boston Archdiocese. It is based on a series of stories by the real Spotlight Team that earned The Globe the 2003 Pulitzer Prize for Public Service.