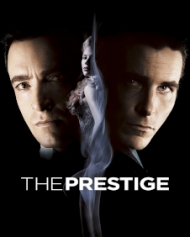 Drama
Release Date : 2006 (India)
20 Oct 2006 (WorldWide)
Cast : Hugh Jackman, Christian Bale
Director : Christopher Nolan
Synopsis
Robert Angier and Alfred Borden are plants for Milton the Magician, with Cutter (Caine) as his illusion engineer. Angier's wife drowns while performing a predicament escape from a Chinese water torture cell, and Angier suspects that Borden bound her wrists with a new knot that he had suggested to Cutter before—one harder for her to undo than his customary one. At the funeral, Borden enrages Angier by saying he does not know which knot he tied.