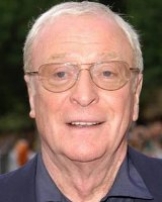 Sir Michael Caine, CBE (born Maurice Joseph Micklewhite; 14 March 1933) is an English film actor. Caine has appeared in over 100 films and is one of only two actors to have been nominated for an Academy Award for acting (leading or supporting) in every decade from the 1960s to the 2000s (Jack Nicholson being the other).

He became known for several notable critically acclaimed performances, particularly in films such as Zulu (1964); The Ipcress File (1965) and others as Harry Palmer; the womanising title character in Alfie (1966); The Italian Job (1969); The Battle Of Britain (1969); Get Carter (1971); The Man Who Would Be King (1975); Educating Rita (1983); Academy Award–winning performances for best supporting actor in both Hannah and Her Sisters (1986), and The Cider House Rules (1999); as Nigel Powers in the parody Austin Powers in Goldmember (2002); and more recently as Alfred Pennyworth, the butler from Batman Begins (2005) and The Dark Knight (2008). Most recently, he has played the protagonist in Harry Brown (2010).

Caine was knighted in 2000 by Queen Elizabeth II, in recognition of his contribution to cinema.

Caine grew up in Camberwell, London, and during the Second World War he was evacuated to North Runcton, in Norfolk. In 1944, he passed his eleven plus exam, winning a scholarship to Hackney Downs Grocers School. After a year there he moved to Wilson's Grammar School in Camberwell (now Wilson's School in Wallington South London), which he left at sixteen after gaining a School Certificate in six subjects. He then worked briefly as a filing clerk and messenger for a film company in Victoria Street and the film producer Jay Lewis in Wardour Street.

From 1952, when he was called up to do his National Service, until 1954, he served in the British Army's Royal Fusiliers, first at the BAOR HQ in Iserlohn, Germany and then on active service during the Korean War. Caine has said he would like to see the return of National Service to help combat youth violence saying "I'm just saying, put them in the Army for six months. You're there to learn how to defend your country. You belong to the country. Then when you come out, you have a sense of belonging rather than a sense of violence."

When Micklewhite first became an actor, he adopted the stage name "Michael Scott". His agent soon informed him, however, that another actor was already using the same name, and that he had to come up with a new name immediately. Speaking to his agent from a telephone box in Leicester Square, London, he looked around for inspiration, noted that The Caine Mutiny was being shown at the Odeon Cinema, and decided to change his name to "Michael Caine". He has joked in interviews that had he looked the other way, he would have ended up as "Michael One Hundred and One Dalmatians".

Caine's acting career began in Horsham, Sussex. He responded to an advertisement for an assistant stage manager for the Horsham-based Westminster Repertory Company. This led to walk-on roles at the Carfax Theatre. After dozens of minor TV roles, Caine entered the public eye as the upper class British Army officer Gonville Bromhead VC in the 1964 film Zulu. This proved paradoxical, as Caine was to become notable for using a regional accent, rather than the Received Pronunciation hitherto considered proper for film actors.

At the time, Caine's working class Cockney, just as with The Beatles' Liverpudlian accents, stood out to American and British audiences alike. Zulu was closely followed by two of his best-known roles: the spy Harry Palmer in The Ipcress File (1965), and the womanising title character in Alfie (1966). He went on to play Palmer in a further four films, Funeral in Berlin (1966), Billion Dollar Brain (1967), Bullet to Beijing (1995) and Midnight in Saint Petersburg (1995). Caine made his first film in the United States in 1966, after an invitation from Shirley MacLaine to play opposite her in Gambit. During the first two weeks, whilst staying at The Beverly Hills Hotel, he met long term friends John Wayne and agent "Swifty" Lazar.

After working on The Italian Job, with Noël Coward, and a solid role as an RAF fighter pilot, Squadron Leader Canfield, in the all-star cast of Battle of Britain (both 1969), Caine played the lead in Get Carter (1971), a British gangster film. Caine was busy with successes including Sleuth (1972), opposite Laurence Olivier and The Man Who Would Be King (1975), co-starring Sean Connery and directed by John Huston (which he has stated will be the film he wishes to be remembered for after his death). In 1976, he appeared in the screen adaptation by Tom Mankiewicz of the Jack Higgins novel, The Eagle Has Landed, as Oberst (Colonel) Kurt Steiner, the commander of a Luftwaffe paratroop brigade disguised as Polish paratroopers, whose mission was to kidnap or kill the then-British Prime Minister, Winston Churchill, alongside co-stars Donald Sutherland, Robert Duvall, Jenny Agutter and Donald Pleasance. Subsequently, in 1978, he starred in The Silver Bears, an adaptation of Paul Erdman's (1974) novel of the same name. Caine also was part of an all-star cast in A Bridge Too Far (1977).

By the end of the decade, he had moved to the United States, but his choice of roles was often criticised — he admitted to and has since made many self-deprecating comments about taking parts in numerous films he knew to be bad strictly for the money, despite working with Hollywood's highly regarded directors such as Irwin Allen, Richard Fleischer, Michael Ritchie and Oliver Stone.

Caine was averaging two films a year, but these included such failures as the BAFTA Award-nominated The Magus (1968), the Academy Award-nominated The Swarm (1978), Ashanti (1979) (which he claimed were the worst three films of all the other worst films he ever made), Beyond the Poseidon Adventure (1979), The Island (1980), The Hand (1981) and a reunion with his Sleuth co-star Laurence Olivier in The Jigsaw Man (1982). Although Caine also took better roles, including a BAFTA-winning turn in Educating Rita (1983), and an Oscar-winning one in Hannah and Her Sisters (1986) and a Golden Globe-nominated one in Dirty Rotten Scoundrels (1988), he continued to appear in notorious duds like the financially-successful-but-critical-failure Jaws: The Revenge (1987) (in which he had mixed feelings about the production and the final cut) and Bullseye! (1990); his appearing in so many films that did not meet with critical or box office acclaim made him the butt of numerous jokes on the subject.

Of the former, Caine famously said (primarily about Jaws: The Revenge) "I have never seen the film, but by all accounts it was terrible. However I have seen the house that it built, and it is terrific."[11] All these film failures later became cult films among his fans today. His other successful films (either critically and/or financially) were the 1978 Academy Award-winning California Suite, the 1980 Golden Globe-nominated slasher film Dressed to Kill, the 1981 war film Escape to Victory, the 1982 film Deathtrap, and the 1986 Academy Award-nominated Mona Lisa. He also starred in Without a Clue, portraying Sherlock Holmes.

The 1990s were a lean time for Caine, as he found good parts harder to come by. A high point came when he played Ebenezer Scrooge in the critically-acclaimed Muppet Christmas Carol (1992), which he considers to be one of his most memorable roles. He played the beleaguered stage director Lloyd Dallas in the film adaptation of Noises Off (1992). He also played a villain in the Steven Seagal flop On Deadly Ground (1994). He was in two straight to video Harry Palmer sequels and a few television movies. However, Caine's reputation as a pop icon was still intact, thanks to his roles in films such as The Italian Job and Get Carter. His performance in 1998's Little Voice was seen as something of a return to form, and won him a Golden Globe Award.

Better parts followed, including The Cider House Rules (1999), for which he won his second Oscar, Miss Congeniality (2000), Last Orders (2001), The Quiet American (2002) and others that helped rehabilitate his reputation. Several of Caine's classic films have been remade to appeal to new, younger audiences, including The Italian Job, Get Carter, Alfie and Sleuth. In the 2007 remake of Sleuth, Caine took over the role Laurence Olivier played in the 1972 version and Jude Law played Caine's original role. Caine also starred in Austin Powers: Goldmember (2002) as Austin's father.

In 2005, he was cast as Bruce Wayne's butler Alfred Pennyworth in the first production of the new Batman film series. In 2006, he appeared in the films Children of Men and The Prestige. In 2007 he appeared in Flawless, while in 2008 he reprised his role as Alfred in Christopher Nolan's critically acclaimed Batman sequel, The Dark Knight as well as starring in the British drama Is Anybody There?, which explores the final days of life.

It was reported by Empire magazine that Caine had said that Harry Brown (released on 13 November 2009) would be his last lead role. Caine later declared (in the Daily Mirror) that he had been misquoted by the magazine.

He is to appear alongside Leonardo DiCaprio in the science fiction film, Inception.

Caine has been Oscar-nominated six times, winning his first Academy Award for the 1986 film Hannah and Her Sisters, and his second in 1999 for The Cider House Rules, in both cases as a supporting actor. Caine is one of only two actors to be nominated for an Academy Award for acting (either lead or supporting) in every decade since the 1960s [citation needed]. The other is Jack Nicholson. The two actors starred together in the 1996 movie Blood and Wine.

He was appointed Commander of the Order of the British Empire (CBE) in the 1992 Queen's Birthday Honours, and in the 2000 New Year Honours he was knighted as Sir Maurice Micklewhite, CBE.

In 2008, he was awarded the prize for Outstanding Contribution to Showbusiness at the Variety Club Awards.

Caine lives near Leatherhead, Surrey, and is patron to the Leatherhead Drama Festival. He has also lived in North Stoke, Oxfordshire, Clewer near Windsor, Berkshire, Lowestoft  in Suffolk  and Chelsea Harbour in London. In addition, Caine owns a unit at The Apogee in Miami Beach, Florida. He still keeps a small flat near where he grew up in South East London.

Some time after his mother died, Caine and his younger brother, Stanley, learned they had an elder half-brother, named David. He suffered from severe epilepsy and had been kept in Cane Hill Mental Hospital his entire life. Although their mother regularly visited her first son in the hospital, even her husband did not know the child existed. David died in 1992.

Caine is a fan of Fulham Football Club.

Unlike many actors who adopt their stage name for everyday use, Caine still uses his real name when he is not working.

In the 2010 UK general election, Caine showed support for David Cameron and the Conservative Party, appearing alongside him at a press conference.

Caine is a fan of chillout music and has compiled a mix CD called Cained, which was released in 2007 by UMTV. According to Michael Caine, he met Elton John and was discussing musical tastes, when Caine claimed that he had been creating chillout mix tapes as an amateur for years. Also in music, Caine provided vocal samples for the band Madness for their 1984 hit "Michael Caine" as his daughter was a fan. He has sung in movie roles as well, including for the musical movie, The Muppet Christmas Carol.