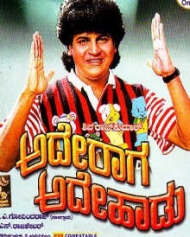 Shivarajkumar and Seema, a debutant, in the lead roles along with Srinath, Thoogudeepa Srinivas, Shivakumar, Pramila Joshai, Girija Lokesh, Sundarashree are seen in supporting roles in this movie.

A young couple, Chandu and Sangeetha, plan to get married with the blessing of their parents. Sangeetha starts to behave strangely and antagonistic towards Chandu who is attacked by a ghost. He recognizes the ghost from a photo of an old lady who had previously cursed him.

Chandu learns the story of the old lady from another woman, who reveals (through a flashback) that she was once a rich...