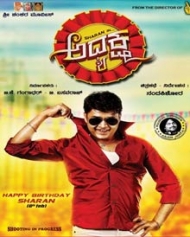 U/A | Romance
Release Date : 15 Aug 2014
Cast : Sharan, Raksha
Director : Nanda Kishore
Synopsis
Adyaksha is a remake version of Tamil superhit movie Varuthapadatha Valibar Sangam and it is a romantic comedy entertainer movie in which, Sharan playing the lead role along with Raksha in female lead. Chikkanna and Ravishankar are playing yet another important roles in this movie.