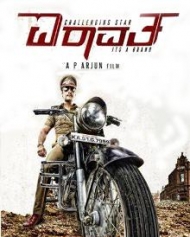 Mr Airavata movie is a action entertainer movie written and directed by AP Arjun and produced by Sandesh Nagaraj. In which, Darshan, Urvashi Rautela are playing the main lead roles along with Prakash Raj in negative role

Darshan (Airavata) is a Police Officer. He serves as a good Police Officer and works for the well-being of society. Darshan's punctuality, anti-corruption motto and strictness makes him an ideal police man and he works towards clearing the violence and negative elements of the society. Like in every story Prakash Raj(Pratap Kale) is the villain and he makes a mass entry on the big screen when Airavata chases his gang.

Urvashi Rautela(Priya) is a engineer who falls in love with Darshan for his stylish avatar and attitude. The twist in the tale is just before intermission and the actual story rolls on the silver screen, which heads to a flash back. Is Airavata a real or fake cop in the movie? Will he be able to eradicate all the negativity and violence of Pratap Kale and make a corruption free society? To know, watch the movie.

Actress Erica Fernandes was initially roped in to play the lead role opposite Darshan. She bagged this role even before the release of her maiden Kannada film Ninnindale's release. She was reportedly shuffling between the sets of this film and also Buguri simultaneously. However, due to unknown reasons, Erica was out of the film. Reports indicated Rachita Ram would replace her for the role which found to be untrue.

Finally, Arjun and producer searched India's most beautiful girl and found her name and Urvashi Rautela's pictures. Also she was an apt choice to feature opposite Darshan because of her striking looks and great height.

Multilingual actor Prakash Raj was signed in to play the main antagonist opposite Darshan. It was also reported that Girish Karnad and Arundhati Nag would play the role of parents to Darshan's character while Bullet Prakash was also reportedly cast for an important supporting role.

In early 2015, Darshan's seven-year-old son Vineesh was reportedly roped in to play a small character role alongside his father.

Mr Airavata movie is all set to release world wide on October 1st, 2015.