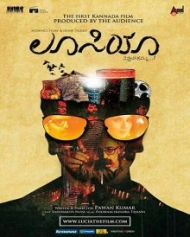 Lucia is a feature movie written and to be directed by Pawan Kumar of Lifeu Ishtene fame and produced by the audience themselves. This is the first Kannada feature film to be completely Crowd Funded.
Story In Detail:
With Lucia, Indian regional films have touched a milestone. A crowd-funded project released under the PVR Director's Rare Banner, this Kannada film is radical in its approach. The promos of the film have soared up the viewers expectations to the sky high and the movie lives upto them.
It is the story of an unassuming torch bearer Nikki (Sathish Neenasam) who works in one of the local theatres in the suburb of Bangalore.
He leads a mundane life and suffers from insomnia.
On one such sleepless night, he saunters out of his crowded shanty and bumps into a street-side drug peddler, who supplies him a magic pill called 'Lucia'. The pill, the dealer assures, would not only give him quality sleep, but would also help him in making his dreams come true.
Then begins Nikki's rollercoaster ride with wild experiences. His ambitions, plans, thoughts and imaginations are all intertwined with his nocturnal dreams. A one-sided romance brews when Nikki meets a girl through a marriage broker.
What follows are scenes of glamorous filmy aura and enchanting songs, including a very snazzy item number. There is a children's party, a near-death experience and plenty of heartache. But at the core, the film ingrains the importance of faith, friendship and relationship with absolutely no banalities.