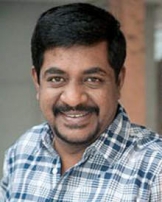 Yograj Bhat was born in Mandarthi, in the Udupi district. He did his schooling in Dharwad. Then he went to Mysore for college studies, where he was a student of Kannada literature. He is married to Renuka, and the couple has a daughter.

During his college days, he watched a lot of foreign classics like Coppolla's The Godfather and Kurasawa’s Ran. He is a great fan of Kurosawa and feeds upon a staple diet of Fellini and Godard films. These films inspired him a lot. He came to Bangalore at the age of 22, hoping to be a film cameraman.

As a new entrant to the film industry, Yograj Bhat served as an assistant director under Girish Kasaravalli, V. Ravichandran, Sunil Kumar Desai, and B. Suresh. Talking about this experience, he says, "It was not about who the guru was. It was about being employed. It was the thrill of watching filmmaking at close quarters. I even enjoyed being admonished by these directors. The thrill of standing next to a camera and listening to its sound is inexplicable." He directed a TV serial, Chakra, before making his first feature film.

It took him eight years before a producer backed him up as an independent director. His first Kannada movie as a director was Mani. The highlight of the film was the memorable performances by Umashree and Rangayana Raghu, both of whom won the Karnataka State's Best Supporting Actor award for their respective roles in the movie. His second movie, Ranga S.S.L.C. (2004), was a moderate box office hit. Sudeep and Ramya played the leads, with Umashree playing Sudeep's mother and Rangayana Raghu playing the bomb naga. The story of the film was written by his friend Soori. The music for the film was composed by Sandeep Chowta.

For the next two years, he did not direct any movies, as it was testing time for him. He spent his time doing a lot of corporate films and documentaries. He had also decided to give himself a bit of time before he ventured into another film project. That was when the idea of Mungaaru Male came up. He almost spent one year writing the script. "Comedy Time," Ganesh liked the script very much, and he introduced producer E. Krishnappa, who eventually produced the film. and the rest is history.