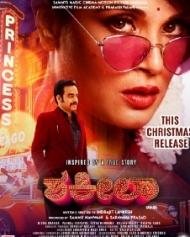 Shakeela is a bio-pic movie directed by Indrajit Lankesh. The movie casts Richa Chadha, Pankaj Tripathi, Ester Noronha, Rajeev Pillai and Sheeva Rana are in the lead roles. The Music composed by Meet Bros and Veer Samarth while cinematography done by Santosh Rai and it is edited by Ballu Saluja. The film is produced by Sammy Nanwani under Sammys Magic Cinema Production banner.
Shakeela depicts the life of actress Shakeela who ruled the Southern film industry for over 2 decades. Shakeela was known as a sex symbol in the South film industry. She has worked in about 250 films and ruled the box office during the late 1990s and early 2000s. However, in 2018, the actress announced that she will not work in B-grade movies anymore.