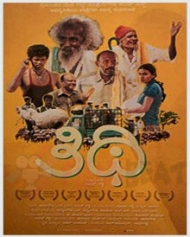 Thithi movie is a family drama with village backdrop written and directed by Raam Reddy. Consisting of a cast of non-professional actors from villages in the Mandya district of Karnataka, the film is a light-hearted story about three generations of men reacting to the death of their 101-year old patriarch.

Thithi is a dramatic comedy about how three generations of sons react to the death of the oldest in their clan, a man named Century Gowda: a locally renowned, highly cantankerous 101-year-old man. Set in a remote village in South India, the three storylines intertwine before converging at Century Gowda’s ‘thithi’ — the final funeral celebration, 11 days after a death.