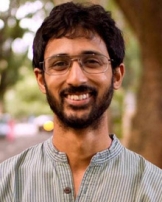 Raam Reddy is an film director who works in Kannada cinema. He made his debut with much acclaimed film Thithi that emerged as a success commercially, also receiving awards and nominations.

After graduating from St. Stephen’s College, Delhi, Raam Reddy went on to study Film Direction at the Prague Film School. Before his directorial venture ‘Thithi’, Raam wrote and directed many short films, most notable among them is a Telugu short film called 'Ika'.

He has also written and published a short novel titled ‘It's Raining in Maya’. In February 2016, Forbes included Raam Reddy in the 30 Under 30 list of achievers. He is the grandson of the first chief minister of Karnataka K C Reddy.