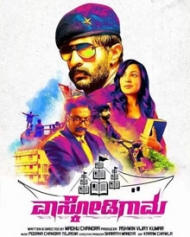 Vascodigama is a story weaved in Gnana Vikas College. Vasu (Kishore) plays a Kannada lecturer in the movie and Shanthi (Parvathy Nair) plays English lecturer. Kishore believes education should be pursued by willingness not forcefully. His preaching is entirely different, he treats students as friends which are uncommon thing in the reality of the present education system.

In this college story, there exists a cute love story of Vasu. As like opposite poles attract each other, it is love at first sight for out hero Kishore. The twist in the tale is when the real shade of Vascodigama is revealed. Will...